The day we moved out of the trailer we had lived in for over a year was bittersweet. Gathering our things, and buttoning up the trailer was a tough day.  We truly enjoyed our time spent on the homestead that we called home, and the departure wasn’t completely by choice. We actually planned to live in the box for more than just a year. We planned to take it with us to the next city.  And when Heather did score that new job in another city, we knew we had to move. The new job was about an hour North, too far to be on call at the hospital at the current location.  But after hours and hours spent talking to people on Craigslist, seeking a new place to park the tiny house, we gave up.  It couldn’t be done.  Not here, not now, anyways.

There simply was no place to move the trailer to. So, hesitantly, we started looking for a room in a house. We found one, and found ourselves moving the small, but surprisingly hefty amount of things from the trailer to our new fancy appartment.  The trailer would stay on the land it was on, acting as a getaway spot for the time being, and getting a few necessary repairs.  We would plan on finding a spot to move it to in the next few months.

Then the rains came.  The heaviest rainy season California has seen in almost 20 years.  And catastrophe struck:  The single large tree near our trailer came crashing down in a windstorm.  The main part of the tree missed the trailer, but its limbs poked some holes in the roof and sides, and ripped off the awning and ladder.  Thankfully no one was in the trailer, and nobody was hurt.  We realized that even though we were bummed to leave the trailer, leaving it for the winter may have been a wise decision. 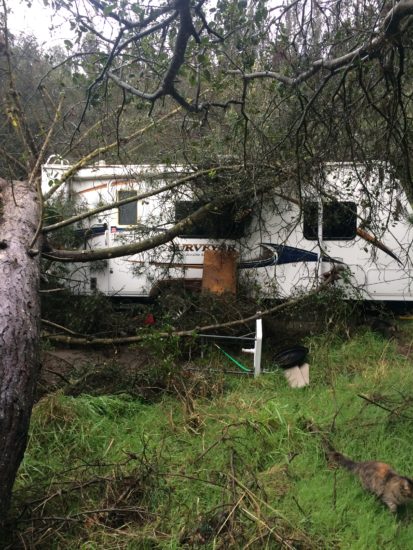 After clearing the tree off the trailer, we discovered that the damage was significant, and the insurance company declared it a total loss. We are very thankful we had insured the trailer. If we had taken the loss ourselves, it would have really hurt. We owned the trailer, so getting a big check was great. It will fund whatever we do next. The insurance company asked when they could come take the trailer to the landfill, but we still saw value in the trailer, and couldn’t bear seeing it go to the crusher.  After some pleading with insurance, we were allowed to keep it.  We now will fix the broken bits, and decide what to do with it.  Should we keep it, or sell it to fund our next adventure or next project?

Only time will tell. Stay tuned!